Ideal for podcasting, home studio recording, field recording, and voiceover use, the ATR2500x-USB plugs into your computer or other device, and functions seamlessly with your favorite recording software. This large-diaphragm, side-address cardioid condenser reduces pickup of unwanted sounds from the sides and rear, and is equipped with a high-quality analog-to-digital converter (24-bit, up to 192 kHz) for excellent fidelity.

The ATR4650-USB is a small condenser boundary microphone that is convenient for podcasting, video- and teleconferencing, and casual recording applications, such as meetings, conversations, and note-taking. The microphone features an omnidirectional pickup pattern to provide full 360° coverage. Its 1.8 m (6') cable is terminated with a USB-C connector and comes with a USB-C to USB-A adapter, allowing you to connect to the USB input on computers, tablets, smartphones, and other devices. With its integral clothing clip, the ATR4650-USB can also be used as a lapel mic. Or it can be snapped into the included slim-profile monitor mount and affixed to a computer monitor or other surface.

Ideal for meetings and teleconferencing, the ATR4697-USB condenser boundary microphone offers a convenient way to record or send high-quality sound through a computer, tablet, smartphone, or other device. The low-profile microphone has an omnidirectional pickup pattern for full 360° coverage. It is equipped with a 1.5 m (4.9') cable terminated with a USB-C connector and comes with a USB-C to USB-A adapter for greater compatibility.

The portable and customizable Beolit 17 Wireless Bluetooth Speaker delivers on power, clarity and style. Featuring True360 Sound Technology, this omnidirectional wireless speaker delivers pristine Bang & Olufsen Signature Sound. Packing a lot of power into its portable size, the Beolit 17 offers up to 24 hours of continuous playtime on a single charge, and the included smart USB-C charger maximizes charging speed to keep the music going. This lightweight Bluetooth speaker delivers big sound, making it the only music system you’ll need in or out of the house. Premium materials such as anodized aluminum and durable polymer withstand the rigors of an active lifestyle, while the full-grain leather handle makes it easy to bring this portable speaker along on all of life’s adventures.

A Portable Speaker That Packs a Powerful Punch 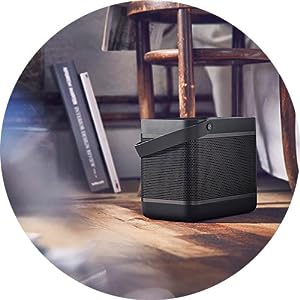 A Better Way to Listen

Unfortunately, the realities of life sometimes get in the way and you can’t finish that perfect playlist you prepared. But fortunately, with the Beolit 17’s convenient continue play function, your portable Bluetooth speaker can pick up exactly where you left off so you never have to miss a beat between listening sessions. Bang & Olufsen transforms your listening experience with better sound and acoustic performance wherever you are with in-home music systems, portable speakers and headphones that integrate seamlessly into everyday life.

Take Bang & Olufsen Signature Sound with you, thanks to Beosound A1's superior audio performance. With a peak power of 2x140 watts as well as an aptXTM adaptive codec to improve sound performance, this small speaker punches well above its weight.

Three omni-directional microphones ensure Beosound A1 delivers clarity on speaker calls too. Stay connected or relax to the bass-rich sound of your favourite tunes.

The music comes with you

Music in the palm of your hand

The LS3.5 is iFi’s 3.0 reboot of the classic BBS LS3/5A which is still now, half a century after its launch still in high demand and revered. iFi has taken the design back to its basic underpinnings and then re-engineered the LS3.5 ground-up for the 21st century. From designing the drivers (not OEM) to the cabinet terminals, where we were dissatisfied, we manufactured our own. This is the iFi level of attention to detail.

The Retro LS3.5 is in many ways a synthesis of the best of the BBC LS3/5A and dash of the Le Petite. We eliminated their respective drawbacks using the very latest technological advancements available. So think of the iFi LS3/5A as BBC LS3/5a+Le Petite with an injection of factor X.

iFi’s brand-new tweeter that is smooth as silk, literally

Silk is smooth, so why not make a tweeter from the ground-up using it at the core? The iFi 28mm tweeter is horn-loaded and uses a neodymium magnet. It is very much a 21st century product – that is, at the advanced edge of tweeter technology. The silk dome combines the lack of resonances at the top of the operating range (as found on metal domes) with excellent dynamics in band. The small neodymium magnet structure shifts cavity resonances outside the audible range. Being horn-loaded, it matches perfectly with the wideband driver to create a mammoth sound field.

The tweeter is used only at the very top end of the audible range; the whole range from 59Hz – 8kHz covering the fundamentals of all instruments except those with very low bass notes and all the formants (the tone forming harmonics of instruments) is covered by the wideband driver, without any electrical or mechanical crossover.

In many ways the wideband driver is very traditional, both magnet and basket. Stamped steel baskets can dissipate energy much faster than cast ones. It harks back to the “golden era” of driver design in the 1970’s. Modern finite element modeling and modern materials have improved the driver in many areas (especially efficiency and bandwidth) over classics like the KEF B-110 which was originally used in the LS3/5A.

The wideband driver rolls off after 8kHz. And it reaches down to 59Hz (with correct placement).

The iFi LS3.5 has a coherency that is based upon the simple fact from the outset, the tweeter and driver are perfectly time-aligned. Simply put, this means if one was looking at a cross-section of the LS3.5, the acoustic centre of the tweeter and the wideband driver as precisely vertically-aligned. This means sound waves from both units arrive at ear of the listener at the same time (as opposed to at different times). This is an oft overlooked weakness of many speakers, but not in the iFi LS3.5.

There are two-chambers in one. The enclosure is maybe best considered a variant of multiple reflex, also, by breaking up the larger volume into two smaller different volume/size sections resonance frequencies are spread and tuned to higher frequencies, where the Amino-plastic open cell foam we use for damping has optimal absorption.

The Acoustic Active Tuning with minimal damping drawn from the musical instrument manufacturing sector further assists with dissipating resonance frequencies higher – just think of the LS3.5 as a musical instrument.

This is why the LS3.5 is a speaker that makes music.

Bamboo is a grass – hence it is a sustainable material and exceptionally environmentally friendly. It is 2x lighter and 3x stronger than wood. The aforementioned Voigt design coupled with the “stiff as steel” bamboo enclosure and the extra reinforcement by the division plus the acoustic tuning – all combined, makes for a remarkably low sonic signature of the box. This is critical as the use of the single paper driver needed for the wide bandwidth cannot be counted upon to block resonances from inside the box passing through the way a heavy and slower plastic cone is able to.

Hence for environmental and sonic reasons, it made perfect sense to use it as a speaker cabinet material. The LS3.5 is 5x more costly to manufacture than standard MDF cabinets. A simple knuckle tap shows its complete lack of colouration – which is easily audible from the first note.

For the very minimal internal damping duties, we scoured the world for the most advanced acoustic materials and settled on the Advanced Amino-plastic open cell foam material. The open-cell surface guarantees that sound waves are not reflected as an echo but can penetrate the cell structure unhindered. The sound energy is reduced in the cell structure, giving an excellent sound absorption capacity.

From our listening tests the ability to ensure the deepest and cleanest bass along with a mid-range that is spell-binding placed it heads and shoulders above all others.

Despite its much higher cost, we just had to have it in the LS3.5.

Leaving no stone unturned, we sourced a binding post that had the purest copper count, had the maximum surface area contact and had to be gold-plated for long-term enjoyment. Rest assured that even the banana speaker connectors we developed from the ground-up!